Scott Johnson is 35 years old with cystic fibrosis and LIVING, BREATHING, SUCCEEDING as he celebrated 6 years post double lung transplant on September 15th. “Dreams do come true,? states Scott, as he gets ready for the Hawaiian Ironman Championships on October 13th 2007 in Kona, Hawaii. This is the most prestigious race in triathlon and the pinnacle of most people’s career. The Hawaii Ironman is the equivalent of the Tour de France, the Super Bowl, the World Series, and Wimbledon. Scott, competing for Team Boomer, has accepted this challenge to try and inspire people with CF to make exercise a part of their normal routine. 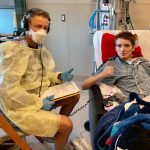